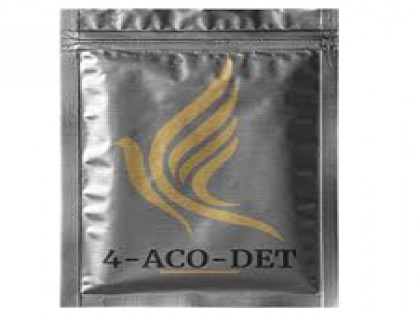 4-aco-det Online
4-Acetoxy-DET is also known as ethacetin, ethylacybin or 4-AcO-DET is a psychedelic tryptamine. Albert Hofmann of  the Sandoz lab did the first synthesis in 1958.

It is expected that the compound is quickly hydrolyzed into the free phenolic 4-HO-DET by serum esterases, but human studies concerning the metabolic fate of this drug are lacking. Other similar products include  4-AcO-DipT and 4-AcO-dmt

Dosage of 4-acetoxy-det
4-aco-det is orally active, and dosages of 10–25 mg are common. Effects last 4–6 hours. The free base is also active when smoked in a dose range of 5–20 mg. Smoking 4-acetoxy-DET greatly speeds up the onset.

Tolerance
4-aco-det tolerance builds up basically immediately after ingestion and takes about a week to exit your system and return to baseline. This tolerance also applies to other classic psychedelics. If taken with LSD or psilocybin mushrooms within a week, the experience could be much less pronounced than usual.

Is it Safe to Mix Synthetic Shrooms with Other Substances?
Users combine 4-aco-det with other psychedelics and cannabis, although poly-drug mixes can still be unpredictable, intense, and open up more potential for harm. And so, like with any psychedelic, it’s best to get to know the substance on its own before mixing it with other entheogens.

Is 4-aco-det Legal?
4-aco-det is legal in some countries while in other countries it is illegal. That’s because the UN Convention on Psychotropic Substances 4-AcO does not include 4-aco-det in any international drug schedules. In the United States, 4-aco-det is unscheduled and vendors sell it not to me intended for human consumption. And so, because psilacetin is an analogue of psilocin,  a Schedule I substance, the manufacture, distribution or possession could be a punishable offense. Although, according to the Third Wave, “Prosecutions are practically unheard of.”